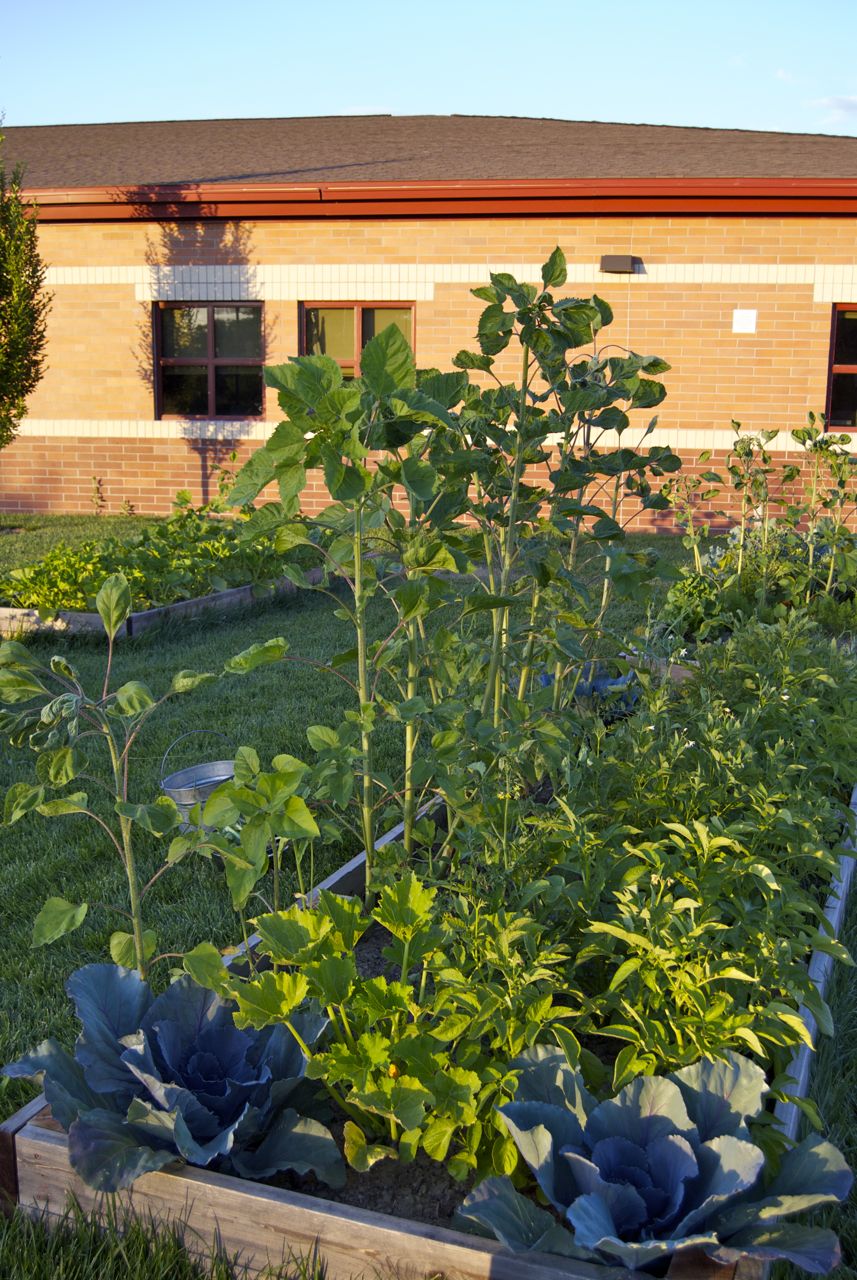 No, it’s not time to start thinking about “Back to School” but it is time to get a look at a newly sprouted school garden.  This spring my daughter’s 2nd grade teacher (Mrs. Kwid) proposed creating a school garden as a community service project for all second graders attending our elementary school.  The proposal was met with much enthusiasm from the rest of the faculty, students, parents, PTA, custodial staff and administration so the plans were quickly laid. 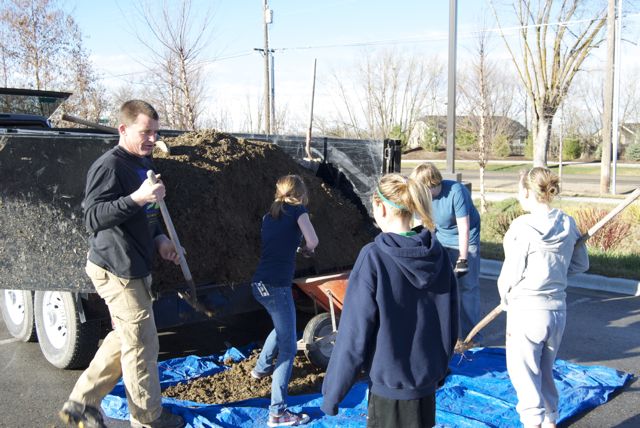 We began our project in the early spring by building four large raised beds and filling them with compost and topsoil.  A little sweat equity was invested by many volunteers and soon afterward we were ready to begin planting.  As every seasoned gardener knows, it is best to start small and that has been our strategy with the school garden.  To keep the garden enjoyable  instead of overwhelming our sole focus this year was raised planters filled with fruit, veggies and flowers. 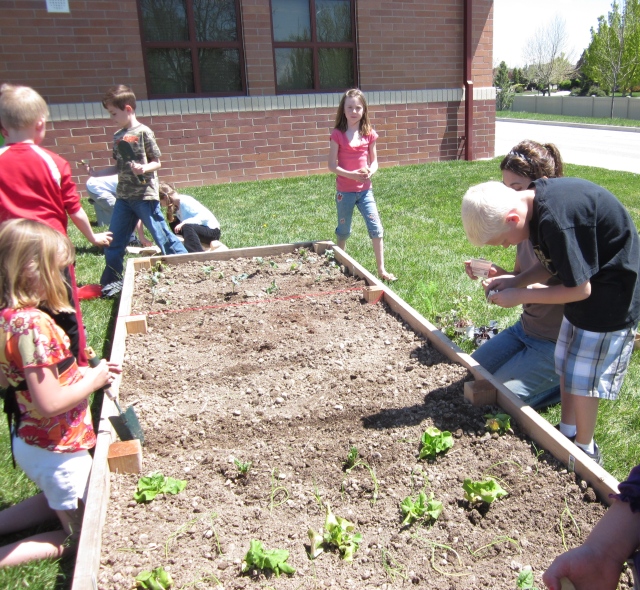 When planting time came excitement was running high!  The second graders were so excited about all the jobs associated with the garden…raking, weeding, digging, planting and putting worms in the soil to make sure our soil was being ’tilled’. They learned about cool season crops and then planted some seeds and plant starts and then many kids began asking if they could taste the spinach or lettuce from the small plant starts.  Soon all the students were wanting to eat raw spinach!  Of course we let them but it did set our starts back a bit with only a leaf or two left after the sampling!

When it came time to plant the warm season crops, the little gardeners tried to remember exactly where they planted their various seeds so they would know which plants were “theirs” when they returned to school in the fall.

To me, these little instances are the invaluable part of a school garden. Kids get exposure to where their food comes from and it helps them create a connection with some whole foods  they may otherwise assume they don’t like.  The next connection is helping kids understand how food grown in the garden provides great nutrition for their bodies and minds. 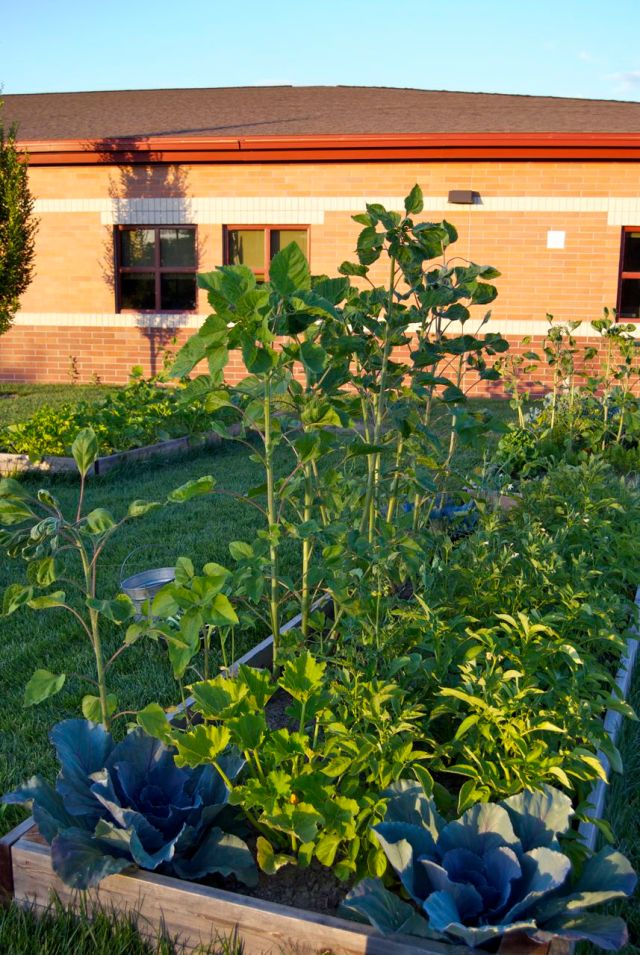 Last week was our  week to volunteer in maintaining the garden during the summer.  What fun it was to see how much everything had grown since June!  We found cool season crops that had produced very well but were ready to be pulled due to our hot summer weather.  We found some goodies just right for ‘pickin’ and some other treasures that need a bit more time to reach their prime.

My daughter was very pleased to see how well the garden had grown and super excited to begin “harvesting.”  I had to remind her we were “working” at the garden too and we would only be harvesting a portion of the crops that were ready so there would be some items for the families maintaining it after us. 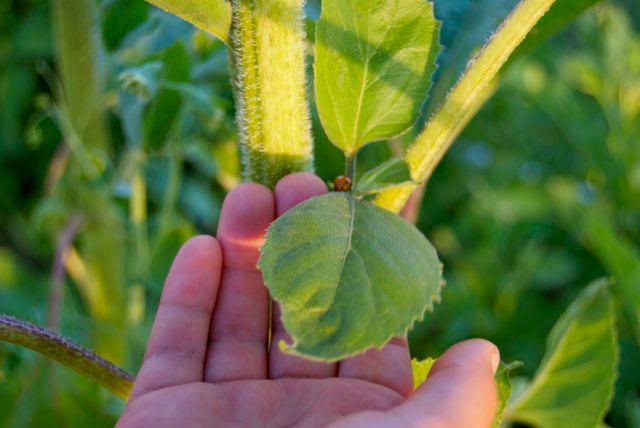 While I did some clean up and weeding, she darted around the raised planters talking to me about which sunflower she planted, asking me to look at all the lady bugs she was finding, asking to take pictures and begging to harvest some carrots to see if they were big enough to eat.

It was a fun evening for both of us and I was pleasantly surprised when she walked over and told me the three sisters method was working because “the beans are climbing up the corn and the squash is growing outside the box like it’s supposed to.” Yay, something more than the garden is growing!

Although our new school garden is small it is a place where kids can learn about the natural world and have ” hands on” opportunities to learn about food, nutrition, physical activity, math, visual arts and community development and cooperation.  With continued support from our entire school community our garden can grow into a diverse environment where much general science can be practiced and observed and children can grow wise beyond their years.

7 thoughts on “Back to school? Naw, just the Garden!”